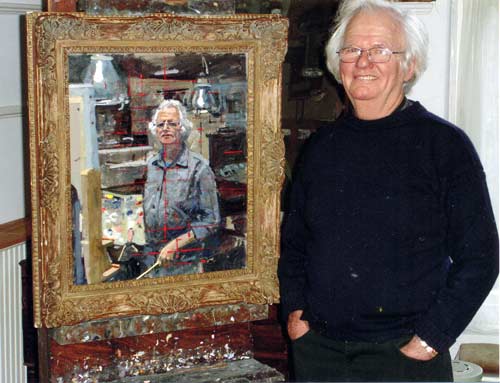 Howard’s first solo show was held at the Plymouth Art Centre in 1955. Subsequent exhibitions were held in 1966 and 1968 at the John Whibley Gallery. From then on he exhibited extensively, both nationally and internationally, particularly with the New Grafton Gallery from the early 1970s. He was given a retrospective in 1972 at the Plymouth City Art Gallery and in 1973 and 1979 was appointed by the Imperial War Museum as official artist in Northern Ireland. He also worked with the British Army in Germany, Cyprus, Oman, Hong Kong, Nepal, Norway, Canada, Belize and Brunei from 1973 to 1982.

In 1962, Howard was elected a member of the New English Art Club, the Royal Institute of Oil Painters in 1966, the Royal Society of Painters in Watercolours in 1979, the Royal West of England Academy 1981, Honorary Member of the Royal Society of British Artists in 1988, Royal Academician in 1991 and President of the New English Art Club in 1998. Among his numerous awards are First Prize in the Lord Mayor’s Art Award in 1966, a Prize Winner in the John Moores Exhibition, Liverpool in 1978, first prize in the Hunting Group Awards and the Critics Prize at Sparkasse Karlsruhe in 1985. Ken Howard lives and works in London.

Howard’s technique is one based on strong observation and a high degree of draughtsmanship combined with tonal precision. The depiction of light is a strong and recurrent element of his work. A notable theme is the nude model in his studio or cityscapes, such as Venice, with emphasis placed on the reflection of light.

“I was brought up in London surrounded by railway yards and factories. This has very much influenced the use of horizontal and vertical structures and lines in my work. I am not a landscape painter, but rather a vertical horizontal and linear painter, which is why I have a passion for the lines that occur within my studios, and include them in my paintings. When I study a model, I think of that figure not in rhythmical terms, but in vertical or horizontal positions and planes.”  – Ken Howard