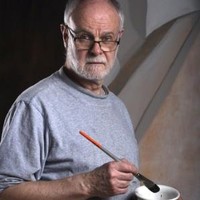 Born in Bristol, England, in 1947, Malcolm Rains immigrated to Canada in 1955 with his family. He studied architecture at the University of Detroit, as well as the University of Toronto, before completing his studies at the Ontario College of Art in 1971. He continues to produce works of art in Toronto.

Rains’ work references the mythology and art of Ancient Greece, both in the titles as well as subject matter. Rains’ “Classical Series” which begun in 1991, breaks away from the Greek ideal of beauty and human form, and embraces the operation of randomness, chance and spontaneity in creation of a new beauty.  Each title references Ancient Greek history “as an act of acknowledgement to the historical role of Greek Art in our culture, but also, and more importantly, as an act of irony.”

Malcolm Rains has enjoyed a successful career, exhibiting throughout North America, where his work has been well received. He has been granted several awards, and many of his works belong in public and private collections.