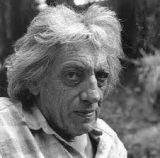 We are actively seeking to acquire paintings by Jean Paul Riopelle.

Jean Paul Riopelle studied at école polytechnique in 1941 for engineering, architecture and photography. In 1942 he enrolled at the école des Beaux-Arts in Montreal. At the école du Meuble he studied under painter Paul-émile Borduas. Under Borduas’s tutelage Riopelle composed his first abstract painting. Riopelle, Borduas and other students formed the Automatistes and between 1942-45, they worked and exhibited together. The Automatistes were known fo their spontaneous method of painting with the subconscious as a major influence. In 1946 Riopelle travelled to France and in 1949 Riopelle had his first solo exhibition at Galerie La Dragonne in Paris, the famous Surrealist meeting place.

Riopelle championed abstract painting that involved large quantities of coloured paints thickly applied to the canvas with a trowel. He developed a successful painting career and was represented in New York. Riopelle also participated in the biennials of contemporary art in Venice (1954) and Sao Paulo (1955).
During the the 1960s, Riopelle’s ties to Canada were renewed. Exhibitions of his were held at the National Gallery of Canada (1963), and the Musée du Quebec held a retrospective in 1967. In the early 1970s, he built a home and studio in the Laurentians and by 1974 he spent his time between St. Marguerite in Quebec, and Saint-Cyr-en-Arthies in France.
Odon Wagner Gallery, Toronto, Canada