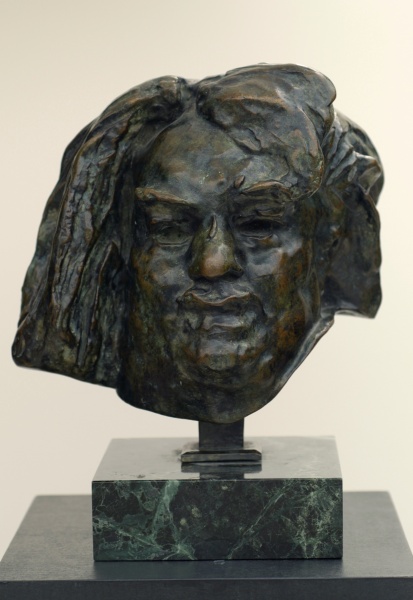 Toronto – Odon Wagner Gallery is excited to announce the arrival of Rodin's Tete de Balzac, a 19th century bronze of famed French novelist Honoré de Balzac. This particular bronze was cast in the artist's lifetime c. 1912 by the Alexis Rudier Foundry in Paris and is part of the amazing history of Rodin's career.

The most remarkable and infamous incident of Rodin's career was connected to his commission for a statue of Balzac in 1891. The leading literary society in France, The Société des Gens de Lettres, wanted a statue of the great French writer to be placed on a site in Paris. The work had been entrusted to another sculptor who died, leaving the work unfinished. At the suggestion of some of his literary friends, Rodin approached the Société, whose president Émile Zola, agreed to the offer. Unfortunately Rodin made the mistake of undertaking to deliver the work in eighteen months time. Much more time elapsed and no statue was delivered nor model submitted. This soon became the subject of popular jokes and quips. Relations between Rodin and the Société quickly eroded and a lawsuit ensued, after which a new arrangement was entered into. The commission was confirmed to Rodin but without a time stipulation. He returned the money advanced to him and agreed he should receive nothing until the statue's completion.

Rodin set out to study Balzac's work, his habits, and his place of birth in order to more fully understand his subject. He also looked at contemporary portraits of the writer in preparation for his piece. Rodin started by making several nude models, which he always did whether he intended them clothed or not. He found this to be the most difficult sculptural interpretation he had undertaken to date. He was bewildered by the strange physiognomy, the complex character and extraordinary personality of the subject, to say nothing of his prodigious literary output, which was all to be considered for the rendering. He wanted to incarnate the great thinker in action but also create Balzac with all his idiosyncrasies. His method was to make form secondary to the spiritual meaning of the character and to simplify the trunk into large surfaces that would adapt to the play of light and shade, thus concentrating the strength of expression on the head. The result was a huge man with a powerful head and neck, whose slightly smiling gaze is defiant and ironic. His hands are crossed under his large monk's robe, which Balzac always wore when working.

It is evident that despite the statue being full-figure, Rodin placed an emphasis on the head and face as a means to convey the writer's characteristic human qualities. It is the head that makes this sculpture to Balzac so intriguing and so significant in Rodin's career.

When the statue was exhibited at the Salon of 1898 it was met with scorn and ridicule. The Société des Gens de Lettres accepted the public's verdict and protested against it as well. There was a huge upset within the Société and several individuals resigned as a result. The commission for a new statue was then given to Alexandre Falguière. However, not everyone detested this sculpture and Rodin did receive a positive reaction in some circles. Collectors asked him to sell the statue and he received several exhibition invitations from London and Brussels. Ultimately Rodin decided not to sell the statue and stated that it belonged to Paris and he would bide his time.

"This work, which has been laughed at, which is being scoffed at because it cannot be destroyed, is the result of my whole life' study- the very pivot of my aesthetic feelings. I was another man the very day I conceived it. My evolution was complete, and I had knitted a bond between the old lost traditions and my own time, which every day will help to strengthen. By force or by persuasion, it will make its way in men's minds."

Zhang He (CAN): Exhibition QI

A Passion for Quality and Connoisseurship