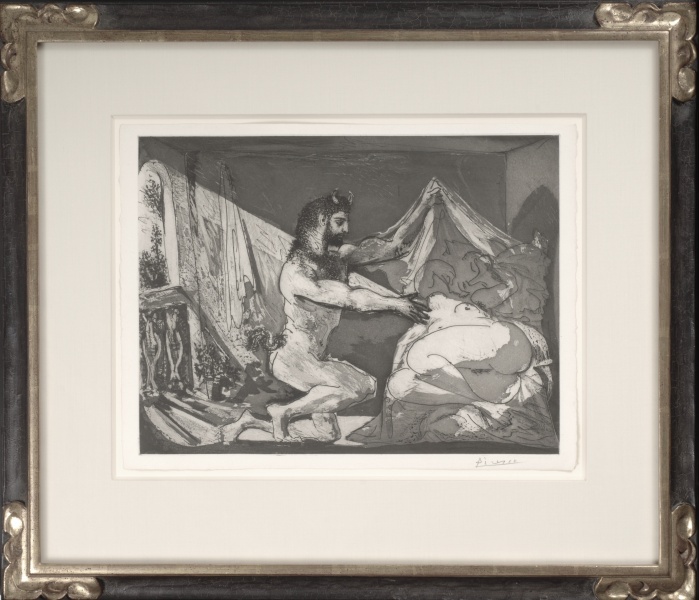 As well as being the most influential painter, sculptor and draughtsman of the 20th-century, Picasso was one of the most inventive printmakers – especially in the 1930s, a decade of unprecedented, personal and political upheaval.Early in 1933 he met Roger Lacourière, the Parisian printer and engraver, in whose workshop he would create many of his most memorable images.

These included the so-called Vollard Suite, a sequence of engravings commissioned by the art dealer Ambroise Vollard. Completed in 1937 after several years’ work, its 100 images form an elusive, confessional cartoon-strip in which the artist reflects both on his creativity and his sexuality.

Intact sets are extremely rare, so much so that the Vollard Suite in its entirety has never been exhibited in this country – until now. In spring 2011, Hamish Parker, a collector of modern prints, generously gave the British Museum a complete, pristine copy; a year later, the full sequence has been placed on display.

As Picasso never gave these images a precise numerical sequence, they are generally exhibited – as here – in the order in which they were created. The suite starts innocuously with a series of models in a clean linear style of almost classical purity.

Suddenly the scene is displaced to a mysterious artist’s studio, in which several of Picasso’s alter egos – the bearded Painter, the horned Faun, the brute-like Minotaur – take turns to converse with, depict and sometimes ravish a big-boned, beautiful girl.

Battles of love ensue, and even more intense battles of art. Picasso’s uneasy, questing nature is mirrored in dialectics of style. The prints veer unpredictably from a sensual, highly realised figurative language to myriad forms of exuberant distortion. The model in the studio is forced to confront her own likeness, or that of her lover, refracted through the medium of art. She sees herself reproduced as a gnomic, large-beaked Cubist bust. She reaches out to touch the image of a man – Picasso, who else? – in the form of a ludicrously sexualised Surrealist sculpture: chair for a body and steel orbs for testicles.

The woman who inspired the sometimes priapic visions of the Vollard Suite was Marie-Thérèse Walter, an 18 year-old whom Picasso – 46 and married – had taken as a lover. On the evidence of the series’ more troubled images, the artist could regard her not only as a muse but also as a curse – someone who had reconfirmed his virility while also condemning him to the role of a modern Pygmalion, fated forever to chase the phantom of eternal youth and beauty.

As the sequence winds towards its climax, it turns ever darker. Picasso as Minotaur looms over the sleeping figure of Marie-Thérèse, nuzzling her breathily with his snout. Then he is alone, facing death in an arena of Goyaesque bleakness. At the last he is blind, a bestial Samson Agonistes, wandering in wilderness, punished for his lusts.

Is it coincidence that as the artist was finishing the Vollard Suite, Spain was descending into the internecine conflict of Civil War? Picasso’s thoughts were surely turning that way, just as his emotions were welling up into the monochrome scream he would call Guernica.

But the abiding impression left by these haunting, paroxysmal, shape-shifting prints is that of an artist engaged in a personal civil war: a man locked in conflict with his own needs, compulsions and desires.