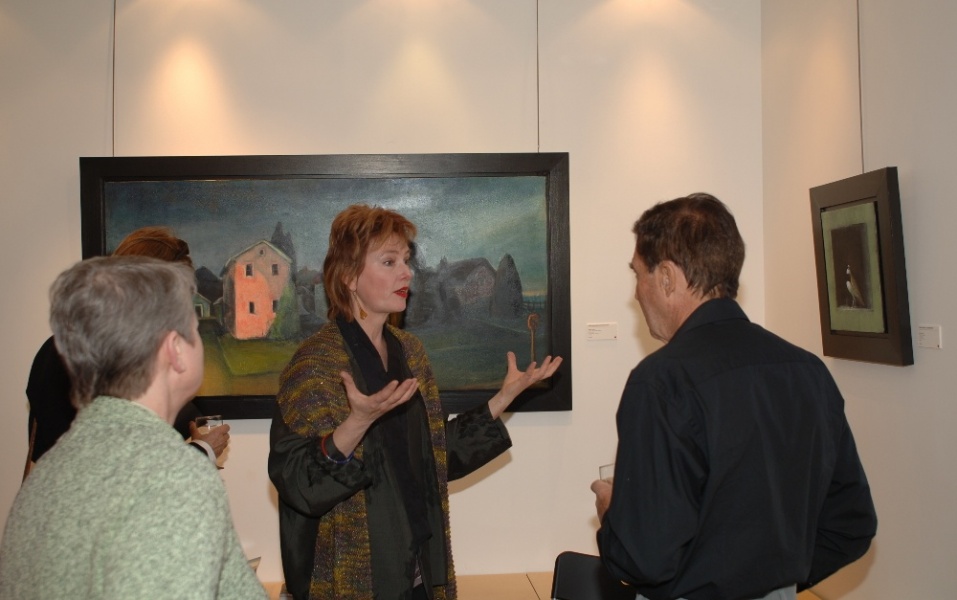 My Conversation with Treacy Ziegler
by Laura Peturson

In the months leading up to the opening of An Open Window, Laura Peturson (LP) of Odon Wagner Contemporary and Treacy Ziegler (TZ) converse about the artist's technique and process.

LP: Your previous exhibitions with Odon Wagner Contemporary have been exclusive to printmaking. Why did you decide to extend your practice to include painting?

TZ: I initially studied painting at the Pennsylvania Academy of Fine Art in Philadelphia but later switched to printmaking. I felt that the painting instruction was too restrictive. I was attracted to the printmaking department because it allowed me to find my own voice. There was more freedom for experimentation. Although I was greatly inspired by painting and paintings, I needed to find my own way of creating images that utilized the painting tradition, but were different than painting. I was not really interested in flat format of what I saw as contemporary printmaking, but in the monoprint tradition of the impressionists. I was interested in the monoprints of Vuillard and Bonnard but I wanted greater intensity of color. I also wanted to incorporate aspects of earlier painting such as chiaroscuro, illusion of space, modulation of form. In order to do this I had to use ideas that I learned as a painter. One was the grisaille. My printmaking instructor advised me to get rid of the black plate and print only with colors. Traditional color printmaking teaches that color plates are printed first and then the key plate (this is the plate that has most of the drawing structure of the print and is usually printed in a dark color) is printed on top of the colors. This made no sense to me at all in that it was like painting colors then applying a dark wash obscuring the colors. Instead, I printed the black plate first and then printed colors on top of this. Essentially I was incorporating the idea of the grisaille. (I'll speak to the grisaille later.)
To answer the question regarding my move into painting; over the past 10 years, I have become more free about how I created the print. I initially adhered to the principle of printmaking that every aspect of the print should be achieved through the press and I avoided hand manipulation of the surface of the print. I eventually started to do work on the print by hand. I had always worked on the preliminary print or working proof by directly working on the tonal print by applying color by hand on top of this tonal print. This is how I decided on the palette of the print. There has always been interest in these hand worked very rough prints by people who came into my studio. Working on the proof in this way allowed me to experiment more with the final making of the prints. The more I manipulated the surface of the print, the more the print took on aspects of a painting. I soon realized that I was no longer making prints but was straddling between printmaking and painting. I decided to take the step into painting by changing my materials to oil and panel and working on unique image that was not going to be editioned. The change into these materials allow greater manipulation of the surface and a greater reworking of the layers of oil which I felt was necessary for painting. So, in this way, it wasn't really a decision to extend my work into painting but rather an evolution of the process begun in art school.

LP: What role does drawing play in your work?

TZ: I love drawing. Drawing is such a luxury; a time for contemplation; a time when nothing is required except visual examination. Drawing is a shopping spree at an expensive store where the shop people serve up a visual display from which you can pick and choose.

Technically, my drawings are executed in tone and, usually, on gray paper using black and white prisma pencils. I never use color. Accuracy is important but depiction is not; how light hits the surface of an object is important. Drawing the object so that "it looks just like that particular object" is not important. Artists strive to recreate the conventional world into a universe that is unique to that artist. In my universe getting "likeness" is not important. Color at this stage of exploration is distracting rather than enhancing. The color of the conventional world is not important to me. I want to bleach out conventional color (sky is blue, grass is green) to provide for my own personal palette of the world. Also I like the abstraction that a tonal study provides. Unless we have a neurological problem, the world is not seen in tonal grays. In this sense the tonal drawing is a step away from the world we think we
know.

LP: You've mentioned that you begin each painting as a grisaille. Can you explain what this means?

TZ: This tonal study becomes the guide for the grisaille. A grisaille is a monochrome painting executed in tones of gray. During the Renaissance, these works were produced to simulate sculpture and were often painted on altars. A grisaille was also used as a preliminary underpainting upon which color was then glazed. This can readily be seen in the work of El Greco where you can observe the glazes of alizarin crimson or ultramarine blue over the gray modeling of form.

Later Constable used a grisaille as a monochromatic painting not to be painted over with color but as a separate guide to follow the pattern of light and shadow. I use a grisaille in both the El Greco tradition and in the Constable tradition.
In following the Constable tradition, I paint a monotype in black on white paper. I use the medium of the monotype because the monotype is a more abstract image than a painting and it is a medium in which the artist cannot control the outcome The abstract image is appealing because it takes me further into my own universe. The lack of control is appealing because it allows the image to develop a life of its own. Working on paper studies allows me to cut up and rearrange the composition. I use this monotype as a separate guide for the grisaille painting that I will paint on a prepared panel.

LP: Is there a connection to printmaking in the way you layer your paintings?

TZ: I lay color upon color on the painting and initially use a limited palette. In this way it is similar to my prints; a slow build up of color using large color fields. One of the difficulties for me in painting was to find a way of putting down paint other than using the brush as a primary tool. I do not like how the brush deposits pigment onto the surface of a painting; I always think of mud streaks. I also see brushstrokes as "pattern" and I see "pattern" (if you think of the Impressionists) as color. Matisse uses pattern as color. Therefore, using the brush as the primary tool is like using too much of one color; I want limited brushstrokes. Of course there are painters who paint without evidence of brushstrokes, but this eliminates the texture, which I find very important to depth of painting. I am talking specifically about my own work: it is not a one-argument- fits-all-kind-of-thing. I'm not against all the powerful paintings that are done with brushstrokes. Obviously, I'm thinking of Van Gogh and Emily Carr. The use of brushwork in their paintings is like a primitive rhythm that underscores the entire composition. To imagine their paintings without this brushwork is to imagine a deflated balloon. (Well, maybe not totally deflated) But for me, coming from
the printing experience, the brushwork in my work seems intrusive.

LP: The surfaces of your paintings have a print-like quality… almost like the paint has been impressed and lifted. How do you achieve this effect?

TZ: My solution to the brush problem is in addition to using the brush I use small rubber hand rollers. A roller drags the pigment across the surface of the painting creating both texture and leaving an even deposit of pigment. Depending upon the viscosity and how you use the roller, you can create different textures. These textures are similar to those that can be created in doing a print. Sometimes these textures have the spattered quality of an aquatint. I also tape out areas of the painting and drag the pigment on the roller across the surface creating edges when edges seem important. There are numerous ways to experiment with the surface of the painting when the artist is not dependent upon the brush. I can also apply paint heavily with a brush and then take an embossed paper towel, press it into the paint leaving the embossed pattern of the paper towel on the surface.

LP: Do you work from life, from memory, or from imagination (or a combination of all three)?

TZ: I work from drawings. But memory is probably more important. Munch said that he did not work from what he saw but from what he remembered. Memory retains that which is important and leaves the irrelevant behind. On a technical level drawing from memory can be limited, redundant or naïve. On the other hand, however, drawing from memory can achieve something that cannot be done from drawing from life. When I was drawing daffodils for the painting "Flowers On An Evening Table", I first did a well-rendered daffodil; it looked like a daffodil. And then I happened to see a print that I did of daffodils a couple years ago. It was not particularly well drawn, but it had a quality that I liked, a quality in which the daffodils didn't have to apologize for not being perfect daffodils. I drew the daffodils from memory. In addition to remembering what they looked like, I tried to remember what was important about the daffodils to make me want to draw them in the first place. I wanted to paint the daffodils because they were vessels. The fact that the daffodils were flowers was of no importance; the fact that I painted well-rendered daffodils was of even less importance.

TZ: I work in a large industrial looking place. I have had people come to visit me who have been surprised by my studio. They say they expect some romantic studio in the woods. They find a studio in the woods, but they don't find anything romantic about it. One friend said it was all about work; that there is no surface that doesn't give evidence of constant work; that it is a place where you want to be wearing a pair of good sturdy boots and overalls. I liked that description of my studio.